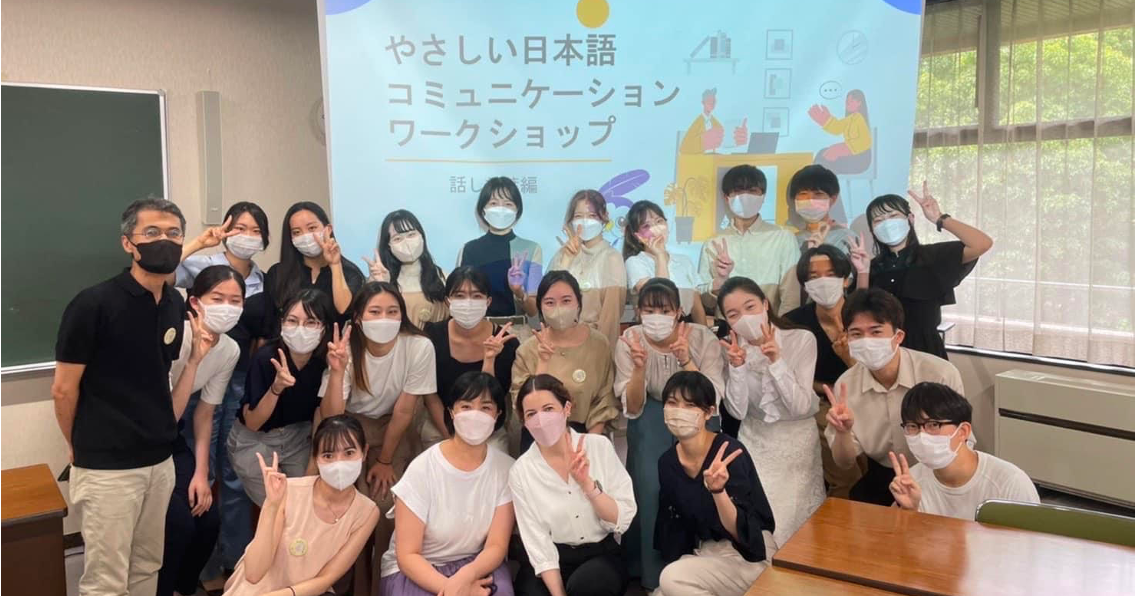 Mercari held a Yasashii Nihongo Communication Seminar for civil servants in Tokyo’s Nakano city on July 21, as part of efforts with Meiji University and the Nakano City office to support Ukrainian refugees.

Mercari started accepting applications for its free Yasashii Nihongo Communication Seminar on April 4, as part of a program to support organizations that will be taking on Ukrainian refugees (local governments, schools, and businesses planning to take on Ukrainian employees). The contents were developed in-house by Mercari.

This was the first of these seminars held.

The seminar this time, held for civil servants in Nakano-ku, was a Yasashii Nihongo Communication Seminar designed to teach participants about communicating with Ukraine evacuees and other Nakano-ku residents for whom Japanese is not their native language. Meiji University’s Yamawaki Seminar has been working on several initiatives centered on “Yasashii Nihongo.” This training came together as a corporate-academic collaboration between Yamawaki Seminar and Mercari’s dedicated language team. Last fiscal year, the Yamawaki Seminar held two Yasashii Nihongo Seminars to promote cultural coexistence. This time, however, in light of Nakano-ku possibly taking in Ukrainian refugees, they held an updated version of the seminar for the first time that includes aspects from Mercari’s “Yasashii Communication” training.

The Importance of “Yasashii Communication” 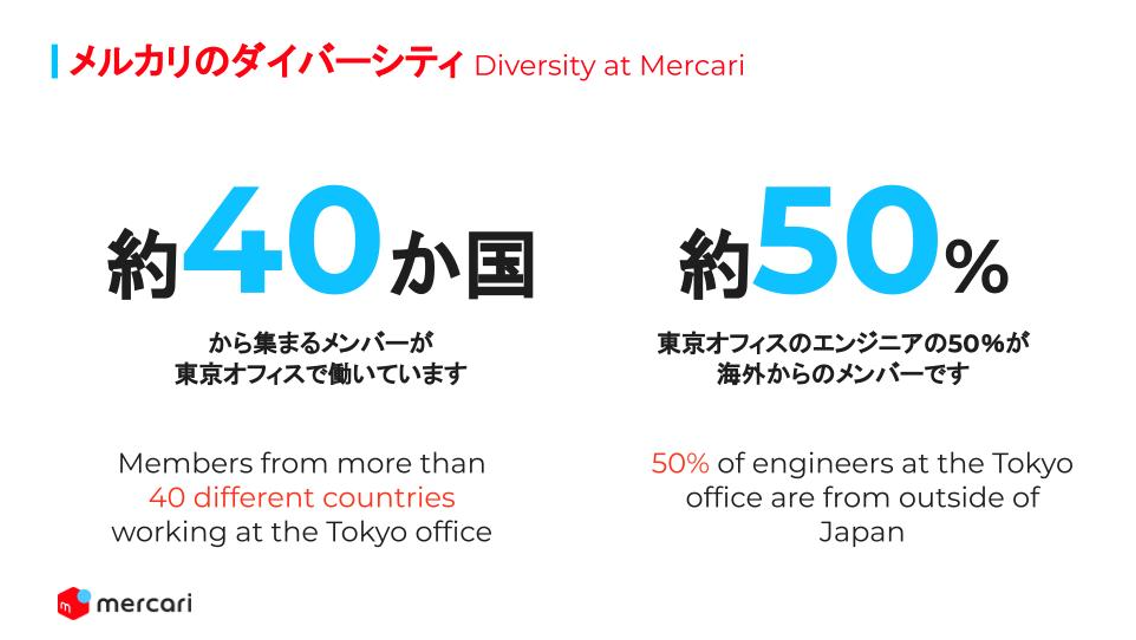 Mercari members working at the Tokyo office hail from approximately 40 different countries worldwide, and half of the engineers have nationality outside of Japan. People working at Mercari speak a number of different languages, but mostly English and Japanese are used in the office. Oyamatsu gave a lecture on the necessity and importance of the “Yasashii Communication” training Mercari has developed over several years as a means to support this language environment.

Mercari’s program aims to empower learners of English or Japanese to be able to speak confidently with native speakers once they reach the upper-intermediate level. While learners may exhibit differences depending on their native language or particular characteristics, generally in order to get to that level for Japanese, learners must study for 10 hours a week for more than two and a half years. “Even if they spend that time getting to an upper-intermediate level, they will still make lots of word choice and grammar mistakes. If native speakers don’t do anything to accommodate them, it can be hard for learners to become active speakers. That’s why it’s important that learners not be left to shoulder the entirety of the communication load by themselves. Native speakers and more advanced speakers need to be willing to ‘meet them halfway,’ adjusting their language usage according to the person they are speaking to,” says Oyamatsu. 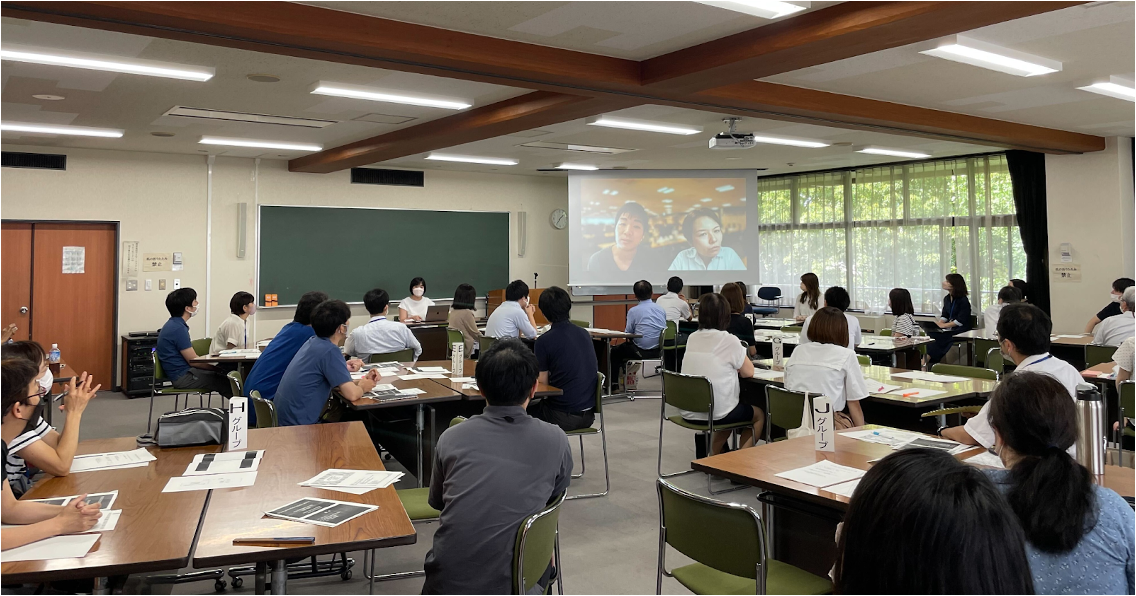 You might assume that it’s better to speak English when talking to a non-native speaker of Japanese. But that’s not the case. Since the topic this time was about how to create an environment that will support Ukrainian refugees, the seminar also touched on the English ability of people from Ukraine. Although English ability of Ukrainians tends to be higher than that of Japan, they don’t necessarily all speak English. “Among people from Ukraine living in Japan, there might be those who are better at speaking Japanese, as well as those who might be better at speaking English. The important thing is to notice when your Japanese or English might not be easy for the other person to understand. That mindset is the goal.”

This is why Mercari has focused on “Yasashii Communication.” The company believes that it needs to lower the language barrier in order to build an environment where all members, with their diverse language backgrounds, can participate in discussion. Mercari says that because everyone with their diﬀerent language strengths can all participate in discussions, they are able to make better decisions, promote mutual understanding, and build psychological safety. 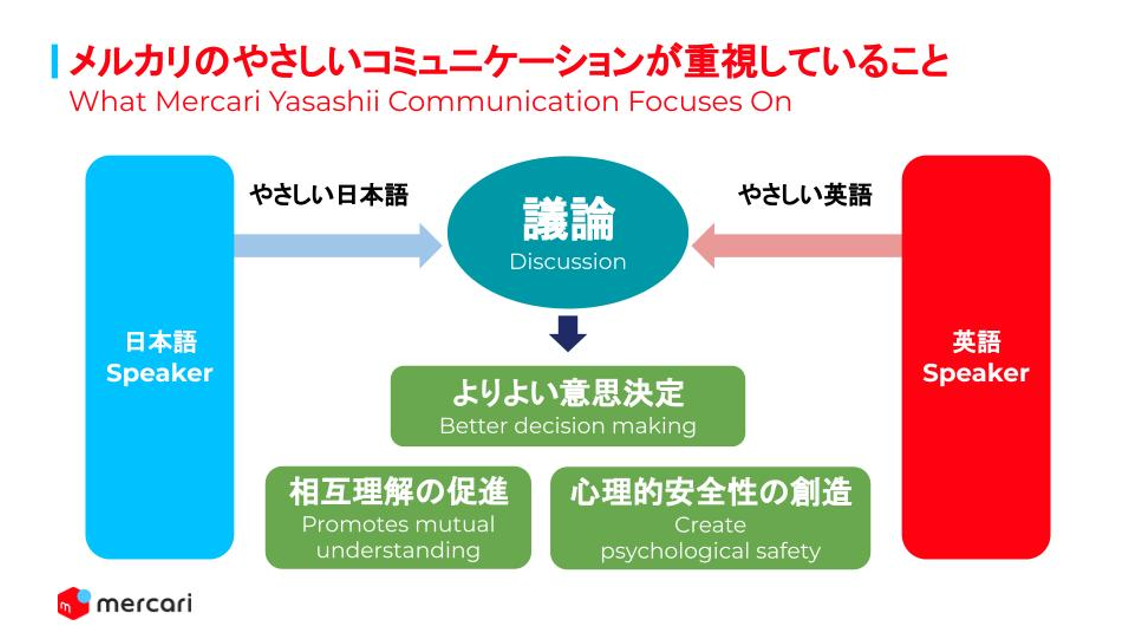 In the second half, students belonging to the Yamawaki Seminar facilitated a workshop activity in groups. 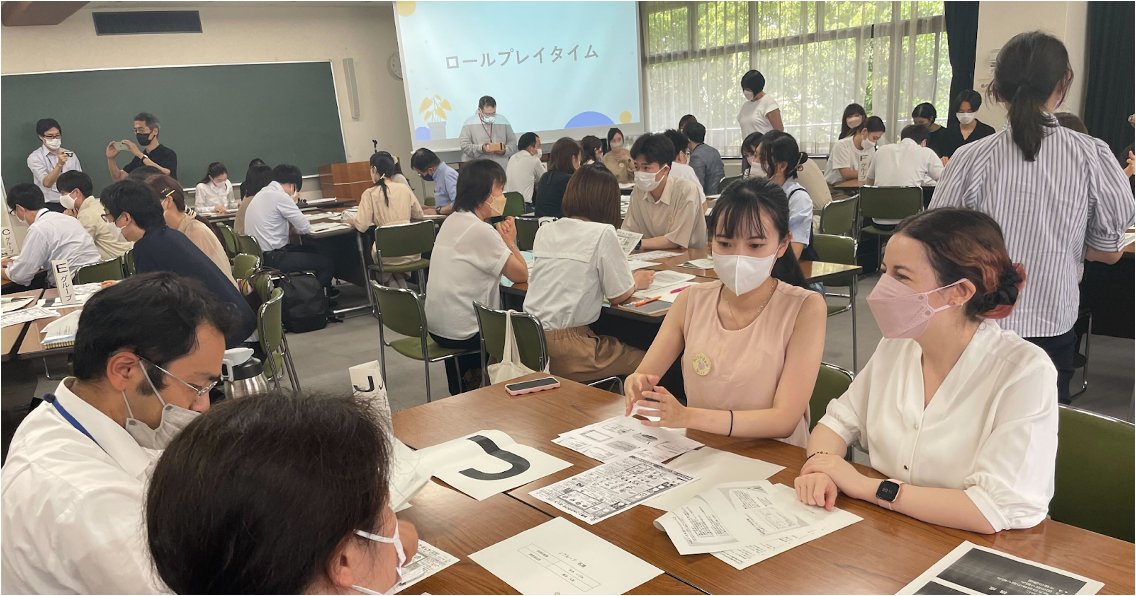 The students introduced the “Law of Ha-Sa-Mi (Scissors),” a fundamental part of Yasashii Nihongo. The Law of Ha-Sa-Mi says to speak clearly (hakkiri), with complete thoughts (saigomade), and briefly (mijikaku). They also introduced their own “Meiji University style” (or “Mei-Dai style”) as a method for limiting your speech to the most important parts. Mei-Dai here means clearly (meikaku) breaking up sentences, deleting unnecessary sentences, and boldly (daitan) revising what you’ve said. The workshop both presented specific points like this and emphasized to participants that the most important thing is to have a communication-oriented mindset. That’s what Yasashii Nihongo Communication is for. The civil servants who participated came to understand that the daily terminology they often use might be difficult for a non-native speaker to understand. They all proactively participated in the workshop activities while focusing on how they could change the way they speak. One of the activities examined the language we use in a disaster situation. In a disaster, you need to be able to communicate information correctly and quickly to a large number of people. However, it also brings up terminology like “flooding” and “landslides,” which can be difficult for non-native speakers to understand. With “flooding” for example, the workshop participants tried a number of ways to communicate the concept with different words, such as explaining that “it means when water is coming inside your house.” 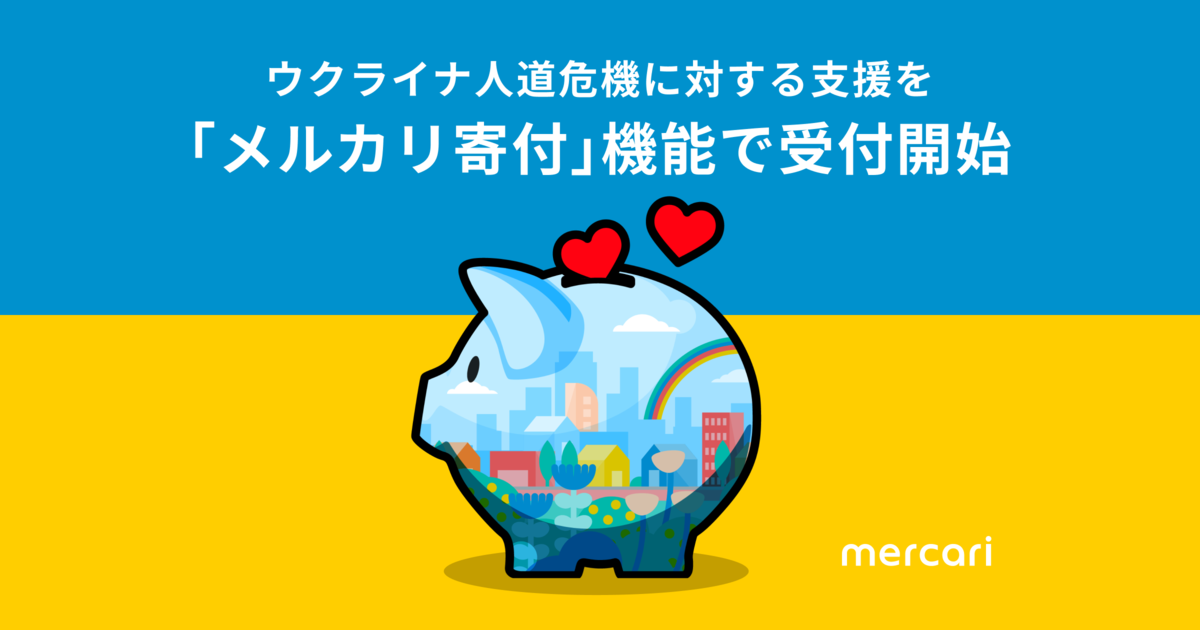 Try donating through Mercari Donation yourself!

How to donate using Mercari Donation: Users can donate using their Merpay balance, with funds added from their Mercari sales, bank account, etc. 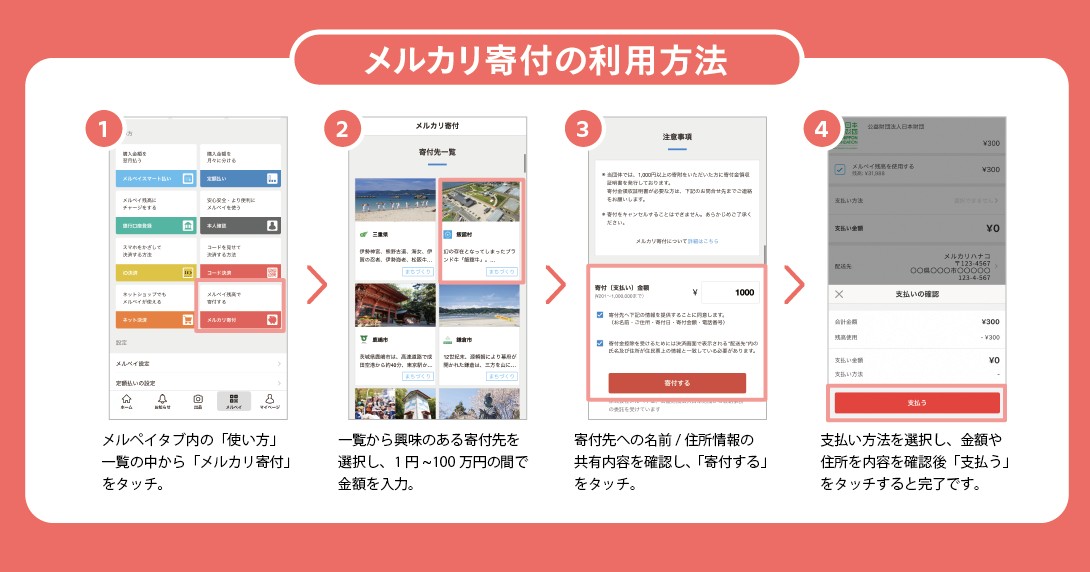 Check out this page for a detailed user’s guide (only available in Japanese).

Mercari will continue working to help solve social and environmental issues through our Mercari marketplace service.